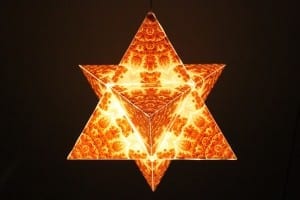 Over eight years ago I was given the Blue Star Seal of Atlantis while meditating in my bedroom. This incident sticks in my mind as one of my most prominent life memories, as it was the day that my pathway truly started.

I had just been through an intense life change and was temporarily living back with my parents. At the time I was calling upon Michael many times a day to remove any facets that I wished to be clear of, and he took this opportunity to appear to me directly. Like most people, my third eye leans towards clairsentience and I ‘feel’ way through life. This time Michael was visibly clear in front of me in a column of blue light.

His message was very good natured and I have always loved his humour, but he told me that it was time to take full responsibility for my path as I had a lot of work to do. He would always be there for me but I had to sort my own problems out….calling on him fifty times a day was not enabling me to do so.

At this point he told me that I was a High Priest of Atlantis. He didn’t say who as I had to work that out for myself, and Diana Cooper would point me in the right direction. He showed me a picture of myself stood within a blue pyramid of energy that originated from my Soul Star chakra, and around my feet was the six-pointed star of Atlantis.

Michael said that this was my Blue Star Seal that I had used during the final experiment of Atlantis to keep my energy fifth-dimensional. It made the concept of needing protection obsolete,as in our higher state we are One with All That Is. It is sometimes hard work to hold our energy high though, especially when our environment could be quite dense.

Within the Blue Star Seal I could hold hold my frequency as brightly as I wished whilst moving through any challenges surrounding me.

I immediately applied this to myself with Michaels assistance and then used it everyday, feeling it’s powerful effect within my life. The only catch was that I could not tell anyone until after the Earth’s energy and collective consciousness had significantly risen following the Cosmic Moment (21/12/12). Only myself and Diana knew about it.

In the Summer of 2013 it was time, and the Blue Star Seal was released as a powerful meditation via Diana’s website dianacooper.com. It has also been included in our first book together The Archangel Guide to Ascension.

I was also shown another higher version of this powerful tool in 2008, and I called it the Gold Star Seal of Atlantis. It was clearly meant to be used at a later date as I promptly forgot about it, until quite recently. The energies are now correct for the Gold Star Seal to be used by anyone who is drawn to work with it.

The energetic principles are identical, apart from the fact that the geometry of the tool is ninth-dimensional. During our second book The Archangel Guide to Enlightenment and Mastery (available June 2016) we work with the 9D energies on several occasions, which is testament to how high many of us are reaching now. These energies are available to anyone who has dedicated themselves to the ascension pathway.

This is an invocation to the Gold Star Seal of Atlantis.

1. Create yourself a sacred space. Light a candle and ensure you are undisturbed.

2. Call upon the Christed Fire Dragons to cleanse your four-body system. Allow them to flood you with golden fire and move around you in powerful vortices of energy.

3. Take this opportunity to hand them anything that you feel may be holding you back right now. Be very specific.

4. After relaxing into their cleansing light, take a few deep breaths and turn your attention inward.

5. Notice how bright, pure and clear you feel.

6. Call now to Archangel Metatron to run a column of Helios light from the Great Central Sun down your Antahkarana Bridge and down through your ascension chakras.

7. See and feel this light moving down through your..

8. As the light reaches your Earth Star call to Archangel Sandalphon to anchor it into the Earth Matrix.

9. You and your chakras are now in a state of higher expansion and you are ready for the next step.

10. Call upon Archangels Metatron and Michael to activate your Gold Star Seal….. “ I (name) now invoke the illumination of my Gold Star Seal of Atlantis”

11. Within your Stellar Gateway chakra you will see a very bright golden light appear.

12. Allow this light to expand around you in whatever shape you are drawn to. The energy will work directly with your higher soul dynamics, and can form into a pyramid, sphere, cube, tetrahedron or whatever you feel.

13. Relax as this encompasses your body and fields.

14. In your head make a statement of intent to fill the Seal with an energy of your choice, the higher the better. The Gold Ray of Christ or Christed Mahatma are perfect examples of this.

15. As the energy solidifies and anchors see yourself stood within a golden star. This is the Six Pointed Star of Atlantis and completes the geometry of this invocation.

16. As Metatron and Michael to hold this around you at all times, and know that it will draw the highest Stellar vibrations to you and assist you to integrate the new frequencies with greater ease. It will also keep your ascension energies in place wherever you may be.

17. Thank the dragons and the Archangels. Shine brightly.